Timelapse of the Yosemite National Park

Yes, another fuckin timelapse. But I love them, even if I didn't really try to make one, I'll do one this summer, which I heard is going to be a friday this year (only if you live in Ireland you get this joke). Anyway, this is a great timelapse I saw last year, which features one of my favourite artists, M83, for the music, made in the Yosemite National Park by Sheldon Neill and Colin Delehanty.
If you want to see the BTS (if you are looking this acronym with a weird face, it means Behind The Scenes), just watch the video down here.

Masking hairs in subject is something that I hate, and most of the times I end up with a not-that-good result and it really disappoint me most of the times, so in this interesting video, commercial photographer Michael Herb shows us an interesting technique to quick mask our subject out of the background with great results.

Ok, just to make it clear once for all: I'm not talking about the Aran IslandS, the ones in front of Galway, but the Aran Island (no S you see?! It's just one island) also known as Arranmore, in County Donegal.
Anyway, the Aran Island, which is, according to Wikipedia, "the largest inhabited island of County Donegal, and the second largest in all of Ireland". It is a pretty big Island, or at least for irish standards, and if you get there be sure you are with a car or at least with a bike, unless you really, really like to walk.
We visited this island first thing in the morning of the second day of our trip to Donegal, and I have to say that is a nice place to visit, but I wouldn't spend more than 3/4 hours in there, as is big but not that big, especially if you are driving.

I'm not sure if I will ever want to do something like that, it gives you interesting abstract pictures, but also a very dirty sensor, but if you have a film camera (where there is no such problem as dust on the sensor) or and old DSRL that you don't use it anymore, why not? Anyway, this is an interesting tutorial by Rob Turney, who is going to introduce you to the art of Refractography, and you can see some of his creations by clicking here.

Beautiful timelapse of the volcano EyjafjallajÃ¶kull in Iceland

Back in the 2010 most of European airports were forced to shut down due to the eruptions of the volcano Eyjafjallajökull in Iceland. Hundreds of thousands of people probably hated this bloody volcano, and I'm one of them, as they couldn't go home or in holidays. But there is someone who have seen an opportunity on this, and one of them is Sean Stiegemeier, who managed to close enough to the volcano and shoot this amazing timelapse.

How To Remove Any Skin Blemishes In Photoshop by Phlearn

In my previous blog I've been featuring Aaron Nace of Phlearn.com many times, simply because he is a master in photo retouching and he is really good to teach us pro tips in that amazing tool but some times not so easy to use called Photoshop. So here we are with yet another great tutorial from him, that shows us how to remove any skin blemishes using an adjustment layer.

Despite its awful cover, I loved their album Puzzle, back in 2007, and I always wanted to see them live, but I never had the chance to photograph them, one time I was in Italy, another one I just didn't get the pass, so it has been in the list of band that I want to photograph from a long while. But this time I was lucky, I was in Dublin and I got the photo pass. I kinda knew it that they are a great band live, many other people told me, and I couldn't agree more. Yes, they become much popular, and yes their last album it's definetely more pop than the previous ones, and again yes, the crowd was full of kids screaming like if they are running for their lives while a huge dog or a not very gentle dragon is trying to kill them, but still they are an amazing band to see live. Plus the stage has a not usual shape, with ramps on the sides, with microphones on it, and in general for a second I thought they wanted to bring a ghospel choir on stage as there were at least 5/6 extra microphones, but not, he (Simon Neil) just run like hell along the stage.
For a photographer probably the last point could be the only problem you can have at this gig, as the lights were amazing, the stage was full of lights with a giant tree in the middle, maybe the drummer was a bit hidden behind his drum, but for such venue with a very high stage (I think is about 1.80/1.90 metres height), to be fair is never easy to get the drummer. So as I was saying, catch Simon Neil it might not be an easy job, as the only moment he is still is when he sings, otherwise he run on stage every single second he can, and that's good from one side 'cause he gives us (the photographers) a lot of variety of shots and angles, but on the other hands it means that we have to run as well, and run in the pit is not that easy.
But, again, apart from that, it is a great show to photograph, and it's really difficult to not come back home with a least one great shot, plus add the fact that despite they are quite a big band nowadays, there were no contract to sign, which is a nice thing.
Down here you can find some of the best pictures I took that night, but if you want to see the full set, just click here. 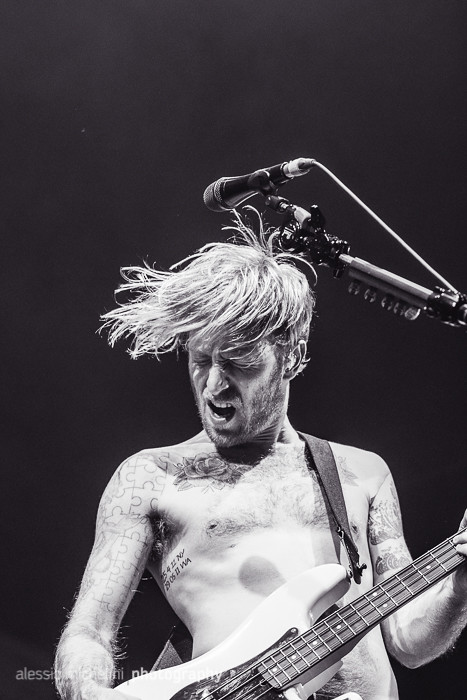 Unlike most of people I generally like to watch ads, even despite the fact that most of the times the ads on youtube are really annoying, not for the ad itself, but because they show you always the same ad all the fucking times, plus sometimes you cannot even skip it after 5 seconds. But sometimes ads are really good to see, it is a sort of art some times, not always, and actually not that often nowadays, but a few of them are really good, and most of the times are genuine and original ideas. But other times they aren't. In the past few weeks youtube is forcing me to see this ad from Carlsberg, called Spartacus, which you can see down here:

With only four videos she already become quite popular with her tutorials (yes, we are talking about Elena Jasic again), and this time Elena will show us how to color tone using adjustment layers in Photoshop. Personally I love her video, well made, simple and effective, way better than most of the tutorials you can find online IMHO.

(via FStoppers via Elena Jasic)

I've been thinking to move to Full Frame from a while now, and I still don't know which camera I should get, a not-that-amazing-but-cheap 6D or a top-notch-camera-but-expensive 5D Mk III. If the budget wasn't a problem, I'll go straight to the 5D, 100% viewfinder coverage, 1/200 of sync speed, plenty of cross-type AF Points, full magnesum alloy body, and so on. But the budget is a problem. Especially because apart the camera, I'll need to buy a good wide lens as well, as my beloved Sigma 10-20mm I use now will not work on a full-frame body, and as a landscape photographer I cannot live without a wide lens.
My wallet says "take the 6D", my hearth says "take the 5D Mk III", my bank says "What about changing hobby? Like doing nothing and give us more money?" my girl says "I don't really care, but what about you buy something to me instead? Like clothes?".
We will see, 6D, 5D Mk III, clothes, it's hard to say what I will buy in the next month or two. In the meanwhile if you have the same problem, you can watch this video from Matt Granger of PhotoNewsReviews which compares the two cameras, hope it helps!