Just the other day I was talking with some colleagues about the fact that I struggle to find new spots in the Dublin area, I thought I've visited every single decent spot to photograph here.
And if we talk about the south side it's probably true, I think I've covered every cool place, apart one that it's inaccessible as it's a private beach. Then last weekend I start to look again on the north side, especially around Howth, when I found some interesting features on a beach in Sutton that I never been before.
And by staring at a satellite map sometimes it's kinda hard to figure out if the place is actually good, how it looks with the high tide, or with the low tide, and you see features that they are kinda hard to understand what they actually are, you see some squares of concrete, but they could be 10cm high or 10 meters.
So I decided to go on Sunday, weather was "just fine", as it was partially clear but with heavy clouds coming from west, but worst case scenario I would have done some scouting, which is always good to do.
And at the end it was indeed a cool place to visit, there were some strange pipes going to the sea which I still don't know what purposes they served, and there were some odd blocks of concrete, again no idea what and why they were there.
I didn't take many photos, but I was quite happy with the result, and overall tones of the sea and sky kinda blended together in various shades of teal.
Anyway, I better shut up and post some photos here: 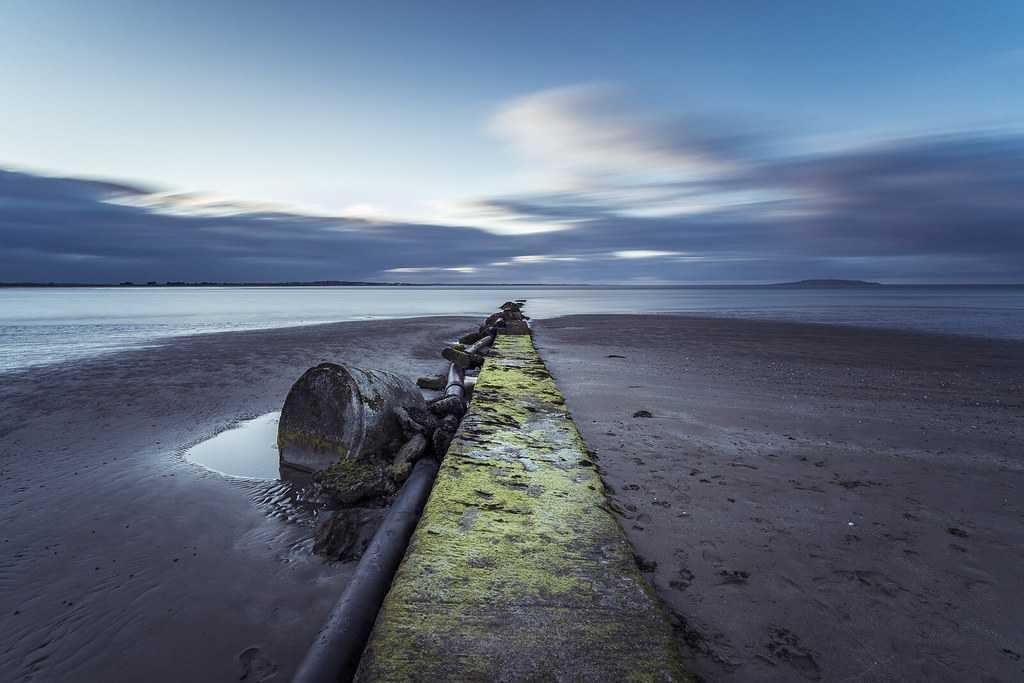 I discovered this place by accident, last summer when me, my girlfriend and a couple of friends decided to do the longest path of the Howth Cliff Walk, departing from Howth's train station, to Sutton, walking all around the peninsula, a good 18 km walk. I did shorter paths in the past, and while it's a fantastic hike to do, it's not that spectacular to photograph in my opinion. But this time was different, the longest path pass in some of the best spots in Howth, and one of them is Red Rock Beach. A tiny beach surrounded by rocks, and with one big rock in the middle. And even walking just after that you can see more beautiful views on the cliffs.
But at that time, the time of the day was wrong, in the summer afternoon, where the sun is far too high and shadows far too hard to make any decent shot, so I promise to myself to come back again there.
And so I did, the first time last December, on a very cold morning, where I had to walk half a hour in the complete dark on the cliffs (and that's why a good torch is the photographer's best friend) to get there just in time. The second time just a few weeks ago at sunset.
Down here you can see some of the best shots I took, and if you are in Dublin, and you fancy a long hike, I highly recommend this one, is not even a hard one apart from the distance. 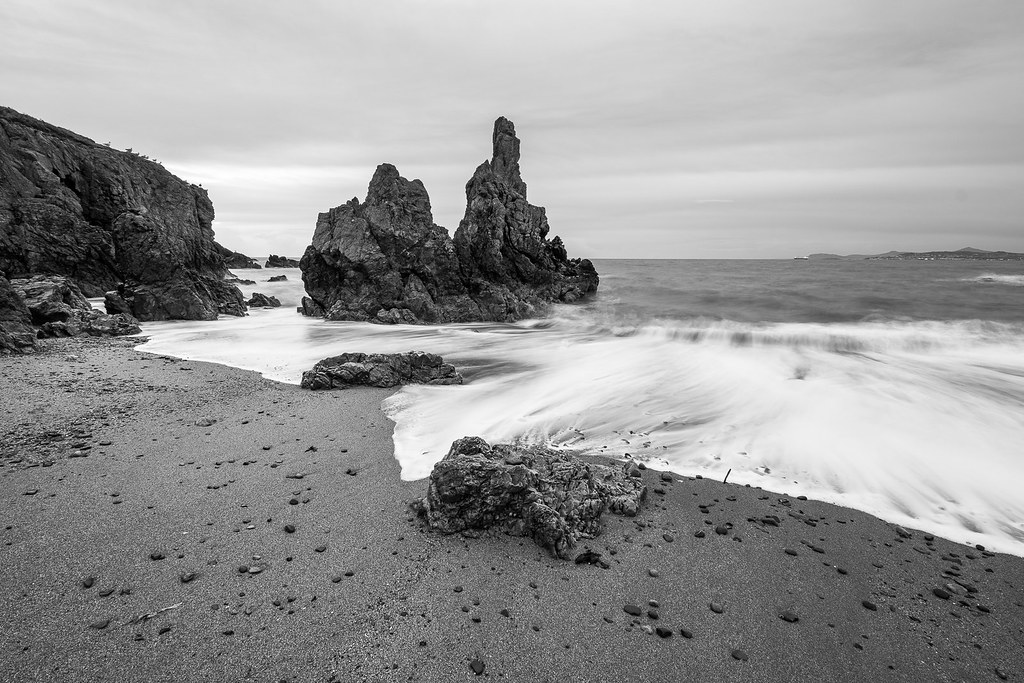 Do you really need ND filters for long exposure shots?

This is a question I've been asking to myself from a while, and especially after I saw this video from Thomas Heaton a few weeks ago, where he says that you can get away without ND and graduated filters, but you can't replace a polarizer, as the latter cannot be replicated in Photoshop unlike the other two. And I agree with him for the polarizer, and for the Graduated filters, which is probably one of the few times where I totally regretted buying them. I was excited about those at first, but after a while I realized that they were mostly useless, as you can achieve better results just using bracketing in your camera and using the graduated filter in Lightroom.
But can we say the same for Neutral Density filters? Can just take some photos and then merging them together in Photoshop achieve the same results as a proper filter?

Since I've been started to do long exposures a long time ago, I always used ND filters, first I started with very cheap Cokin filters, which were terrible, very easy to scratch as they were made with some cheap resin, they made any photo on the magenta side, and just forget about sharpness, that one goes straight to the bin.

Then I tried a variable ND Filter, the Light Craft Workshop Fader ND Mk II, which it did sound fantastic on paper, but again it was just a waste of money, you can read more about it here and here).

A trip to Shankill beach, Ireland

Years ago I went to this beach while scouting for new locations to photograph in the Dublin Bay area, and one of these places was Shankill Beach. A very easy spot to reach from the DART (Dublin Area Rapid Transit), just 15 minutes walk from the train station.
From google maps I couldn't see anything peculiar to photograph, but sometimes it's really hard to judge from a photo taken from a satellite, so I thought I'll pay a visit there, to see how it looked in real life, and... It was rather disappointing.
But it was years ago, with much less experience than now, where I was much less prepared (always bring trekking shoes to a rocky beach and always check the tides), and I came back home with practically no decent shots.
But apart from scouting, another important thing to do in this type of photography is to visit the same locations you already have been. One because with different condition, time of the day, season, tide level (which are pretty extreme here in Ireland), the same place might look different, maybe something changed in the meanwhile (or maybe not), but until you go there you don't know. And two is also for the forementioned reason, that you have more experience, and probably now I know better what to search to create a good composition.

As per Hawk Cliff, I've already visited this place in the past, but again it was on an afternoon, and in the middle of the summer, so too much light and far too many people around.
This time we went on a insanely cold morning on a sunday on february, so no people around, apart a few other crazy photographers we met there. And unlike the previous week in Howth, which it went "meh", this time, despite the fact that was painfully cold, it was perfect!
I love Forty Foot, is one of my favourite places in Dún Laoghaire, another tiny place on the coast close to Dublin, and like Hawk Cliff it's simply superb.
The level of the tide was perfect, even if we risked to get completely soaked by the waves a few times, but that gave us the opportunity to take some of the best shots I took in the last while.
Also from now on I want to start to include the map of the place I photograph, so it's easier for other photographers to get there if you like the place (and my shots) and you want to photograph it too!

Also my suggestion is to go there in the winter, during the week or on Sunday, as I recently discovered that locals love to go to swim on these places on Saturday, as a lady told me that "we don't swim on Sunday as it's a day dedicated to rest". Winter is perfect because it's very cold, so there are less chances to find people swimming there, and also the sunrise is at a decent hour, while on the summer it might be at a very early hour, like 4am or earlier. But it's up to you, if you don't care to wake up very early, then go on the summer.
The sunset is kinda pointless as this part of the coast is completely covered by the surrounding hills, and in Ireland it's easier to get the good weather on the morning rather than the afternoon.
Anyway, time for the photos, so down here some of the best shots I took at Forty Foot, while here you can find the full set. 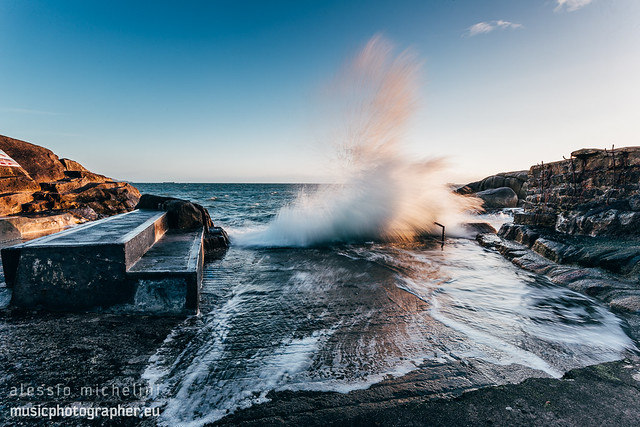 That was probably the fourth or fifth time I came to this place, I’ve already blogged about Hawk Cliff more than a year and half ago, and it’s definitely one of my favourite places in Dublin metropolitan area, and I’ll never get sick to go there. And when my friends asked me where we could go for another early morning photography session, that’s was my first choice. It’s just an outstanding place to visit everytime, and if you get there at the sunset, it’s just out of this world, where you can see the whole Sorrento Bay (no, I’m not talking about Italy, but the bay from Dalkey to Bray is called the Sorrento Bay as it looks similar to the Italian counterpart). Also you can meet some interesting person, those hardcore irish people that loves to swim in this tiny place, yes even on January at sunset, and some of them don’t even have a swimsuit. I honestly admire these people that despite the cold, despite the weather, despite the fact that the sea is not exactly like the Mauritius, they still come, at the very least a couple of times per week, to swim.
Anyway, there’s nothing else to say about this place, and I better let the pictures talk about Hawk Cliff, so down here some of the best, while you can find the full set on my flickr account as usual. 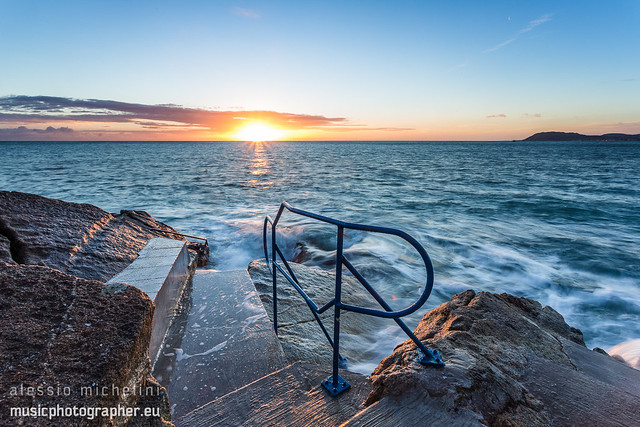 We all know that if you come to visit Ireland, you don’t come for the beaches, you don’t expect to find a place like Copacabana, or Bondi Beach, and you certainly knows that it’s highly difficult that  you come here to spend a week lying down on the sand while drinking a fresh cocktail under the sun. If you do, you probably need to buy this before you go into any trips you might regret later.

But this doesn’t mean that there are no beaches in Ireland, in fact there are plenty of them, maybe you don’t get a crystal clear water like in the middle of the mediterranean sea, and you might not get a superfine sand, but there are plenty of extremely cool places you can go on the summer, or like me, even on a cold clear day in January.
One of them is a beautiful place called White Rock Beach, which is between Dalkey and Killiney beach, found by accident last summer while walking randomly after I went with a friend of mine to another cool place nearby, Hawk Cliff. But when we went there at that time it was during in the early afternoon, so too bright, and in a very sunny and hot day, so too crowded, it was great for spending some time under the sun, but just the wrong time for any landscape photography, so I decided to come back there during the winter, when the sunrise is very late (in January it’s at around 8.30am) and there’s almost nobody there. 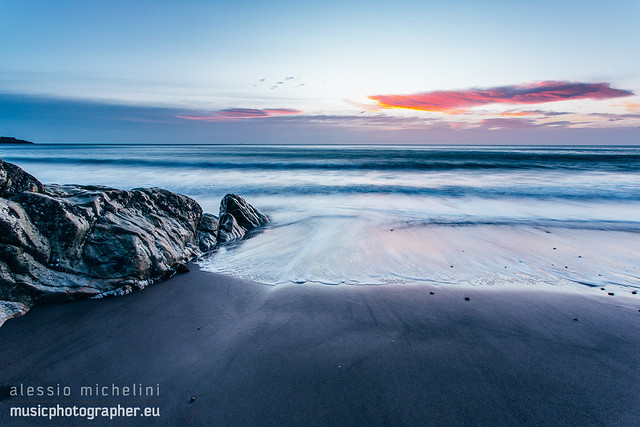