I met Wallis Bird an year and half ago, as I have to take a portrait of her for the Choice Music Prize, she was probably the nicest person I photographed that day, and since then I really wanted to see her live, as I think she is a really talented artist, so for these obvious reasons I couldn't ignore her gig in The Academy, so I asked for the pass (possibly my last photo pass in The Academy, but that's another story).
I thought she was good, but I was wrong, in fact she is fantastic, really a great performer and she surpassed my best expectations! And she is a tornado on stage, which made my job a bit more difficult, but at the same time I could catch some fantastic photos of her. Light-wise, as she didn't bring any additional lights, and only venue lights were used, it showed again how this venue could be a really good one for photographers if the lights are well used. The gig was well lit from the very start and honestly I can't complain, so add a very good looking and very dynamic artist on stage, with good lights, and the result is a really good gig to see and photograph.
As usual down here you can find some of the best photos I took that night, while here on flickr you can find the full set. 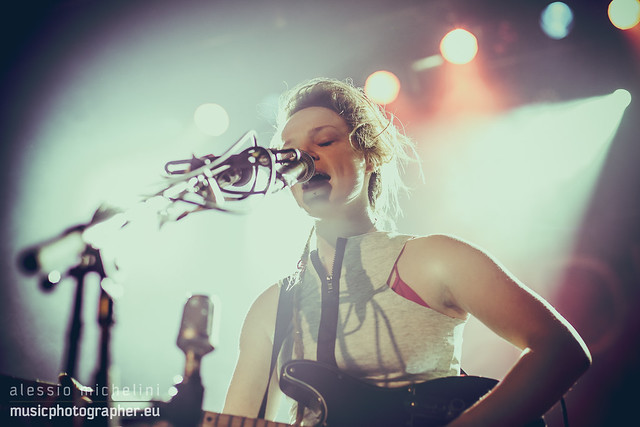 Is the Fuji X-T1 a viable camera for music photographers?

A couple of months I had to shoot the live show of Corner Boy for Red Bulletin Magazine, and because I could shot the entire show, I tried to bring my Fuji X-E1

alongside with my trusty Canon 6D, just to see how it behaves in such light conditions. While the AF was struggling sometimes and the white balance in some shots was completely off, a good amount of shots were pretty usable, even despite the kit lens, which is an excellent general purpose lens, but for not so much for gigs, or at least not for my standards, as I mostly shoot with only very fast prime lenses, no zoom lenses, and the slowest is the Canon EF 135mm f/2L USM

. But despite a slow lens, and a camera not made for that type of photography it was pretty decent, still not usable for me, especially when you have only 3 songs, and that’s the 99.9% of gigs, and with a slow buffer and not that good AF it would make pretty impossible to use for a live show.

The initial reason I shot this band was simply to have another chance to test the Fuij X-T1, but after Ham Sandwich full gig in the pit I didn't really need to do any more tests as I was pretty with what I got, but I had the pass already approved and I went anyway. To be  honest I didn't know the band, and they are not exactly my cup of tea, but their live performance was pretty good, but I don't really want to give you a music review, as far I could see if you like their music they were great, if not, you should ask to yourself why you wanna see these guys, but that's a pretty much obvious general rule.
Anyway, to shoot them was pretty good, as they are a pop band, they had plenty of lights on stage, even if only the venue lights were used for this gig, no extra/fancy lights from the band. But as I said before, the Academy has a decent light system, and if it's well used you can get great shots, if not it can be a nightmare, and while many photographers complain that they often get 'shitty' lights in that venue, I think the venue it's not to blame, but simply that some artists want a "dark" show on purpose.
Anyway, as per standard, down here you can find some of the best shots I took that night, while here on flickr you can find the full set. 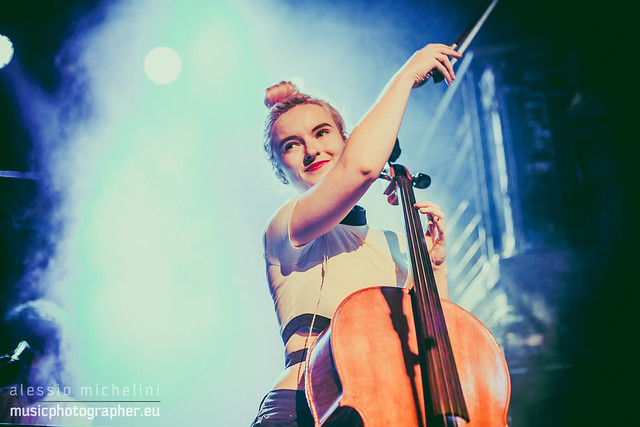 I just saw this video made by The Cooph on PetaPixel and I couldn't post it here, it's just too cool to ignore it. 7 simple photography hacks you can do it right now, on the cheap, and very quickly. The number 2 & 3 are my favourites!

Once again here we are with my monthly appointment. Last month has been quite busy, several gigs, two photo shoots for The Thin Air, and as I mentioned in another post, the guy in Fuji were so nice to loan me a Fuji X-T1 for a couple of weeks (reviews are coming!). But most of the stuff is pretty much categorized and it's going to end up in specific posts, here I want to publish the stray photos, the one I took randomly or that are going to be lost in my massive flickr account. So down here you can find these photos, and feel free to leave a comment, even if you just want to say that they are crap.
As usual all these pictures are available on my flickr account. 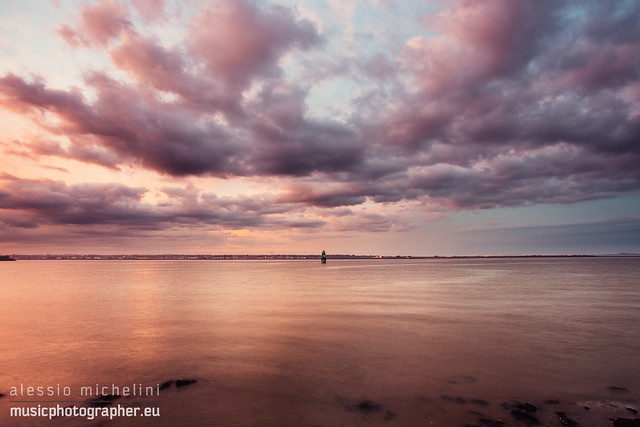 This band name might not be the best, even Bono Vox of U2 once suggested them to change it, but despite their fancy name, I think whoever has seen them live will confirm you that they are one of the best live bands you can find in Ireland. I've seen them countless times in the past years, and before entering the Olympia Theatre I knew it was going to be a cracking gig. And when they told me that I could photograph the entire gig (yes, you read well, the entire gig, from start to finish) it was like Christmas!
This gave me the chance to do more tests with the Fuji X-T1, with no rush I could take my time and swap in between the two cameras, my DSLR and this little beauty. I wish I could have a better lens, like the 23mm f/1.4 so I could compare it to my Canon 35mm, but I only had the kit lens so I had to adapt to it.
Anyway, as planned the gig was outstanding, and with this guys from Co. Meath you can't expect anything different, it's just a lot of fun, to see them and to photograph them.
Very good lights from start to finish, and a couple of times we got confetti too, which always makes the fan happy, and whoever is gonna clean after not so much. The band had some extra lights as well, which gave the extra punch to the already good venue lights.
The only downside of shooting the full gig is that at the end, in between two cameras, I got about 1500 photos to go through on Lightroom, with the result of a massive photo set on flickr with 55 photos! As usual down here you can find some of the best ones. 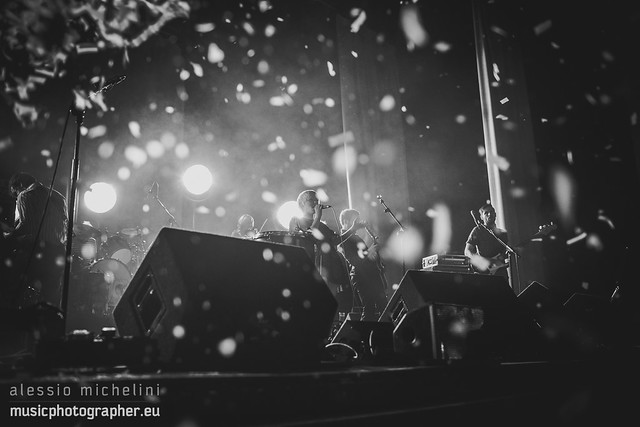 Don't even think to go to photograph this gig. I'm a bit behind with gigs here, so I better catch up! The band of today is Hermitage Green, one of the many new bands emerging from this green island in the past months. But the real reason why I went to this gig is not because I'm a fan of them, but just because I wanted to try a new camera I'm testing at the moment, the new Fuji X-T1! But I'll live the details of my impressions about this camera to a future review I'm going to publish in the next weeks. Anyway, the gig was pretty good, a bit crowded stage, with a not very usual band placement, as the drummer was on the right front side of the stage and on the back there were only the keyboard player and few amps. Which is good as I generally can't take many photos of the drummer as he's generally far on the back and covered by other band members, so finally this time I've some good shots of him!
The band didn't bring any additional lights, so only the venue lights this time, but as I said in the past, the Academy can be a bad venue to photograph or a very good one if the stage lights are well used, and fortunately this time was the second case.
There were a bit of smoke so it did help to give some depth to the lights, and the band itself was in general pretty good to photograph. So overall it was a pretty good, not fantastic, but good gig to snap, and I was well impressed by the Fuji X-T1 performances, despite the handicap of the kit lens (not exactly the best lens to photograph a gig for me).
Anyway, as usual down here you can find some of best photos, while by clicking here you can find the full set on flickr. 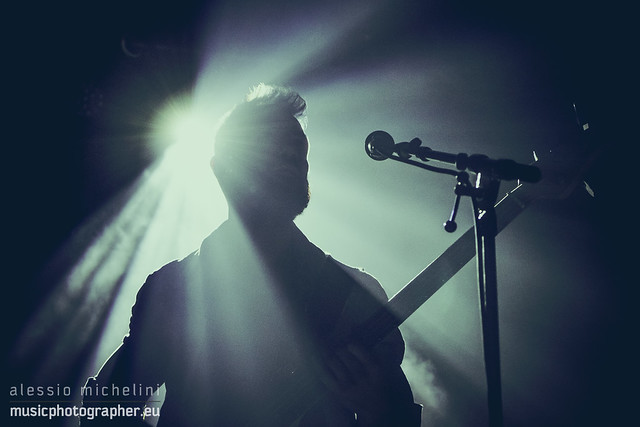 The Strypes @ The Academy

One of their songs is titled "You can't judge a book by the cover", and they probably did that song to all the people, like me, who tend to see only the surface of this band. It's a silly miscalculation I did, thinking that because they are young (very, very young) they can't be good. Yeah, on the record everyone can be good,  but on the stage? But as the guys from MythBusters, I love to be wrong sometimes. In fact the band is incredibly good on stage, probably too good, I can't believe they are still teenagers, and this makes me feel very, very old. So you kinda get that I really like the performance of these guys, but how is to photograph them?
Well, just great! They sound like someone freezed them for 40 years or more, and they you have the feeling that you are actually shooting a band from the 60s, they are really camera-friendly on stage, they do all the moves you expect from a band of this genre. Again, I still can't believe they are 18yo. The entire show is really well lit, even if the Academy in the past years hasn't been a very photographers-friendly venue, this time  was just spectacular, and the band itself brought some extra lights which it definitely improved a good base.
I highly recommend to photograph / see this band, they are simply great, and I'm not even a fan of that kind of music.
Anyway, down here you can find some of the photos I took that night, while on my flickr account you can find a very beefy set (51 photos!). 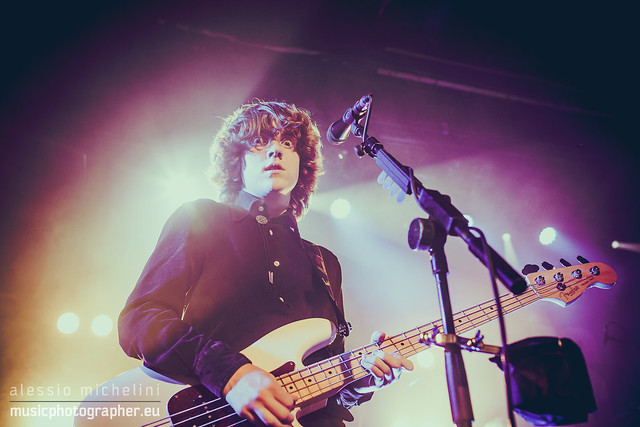 As I said in a previous post, March was pretty busy on the music photography side, and aside the several gig I took, I also had the chance to photograph Extra Fox (briefly called Kuma Hana), which is the solo project of Neil Adams, one of the minds behind one of the most interesting irish bands emerged in the past few years: The Cast Of Cheers.
For the shoot I was thinking to several options, but a few days before the shoot I discovered a new place in Dublin, the Tivoli Car Park, right in the middle of the Liberties. I know that graffiti are a bit of a cliché, especially when the artist plays electronic music, but it is just because the mood of the graffiti fits perfectly with the type of music, so I decided for the cliché and to do the photo shoot there. Also during the shooting Neil told me that he lived there for a while, so he was in some way connected to that place, which is perfect for me as it create a bond between his music and my photos. 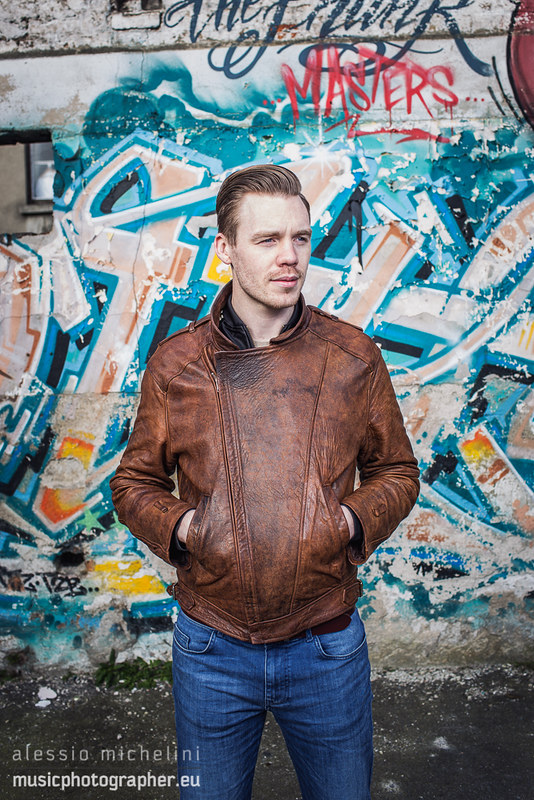