The journey to home

After a week of proper summer it was time to come back home, in Italy. Unfortunately between Crete and "home sweet home" there were two airports, one of the worst airport in Europe, which is Rome Fiumicino, and its cousin, Athens Airport, which in only one hour, that was the time I had to transfer from one flight to another, made me reconsider if Fiumicino was actually the worst.
Why that bad? Well, for start, put a ticket control JUST AFTER THE ESCALATORS, and when I mean just after I'm not talking about 20 meters, I'm talking about 3 meters, 3 very short meters full of people insanely compressed while the people coming from the escalators scream "don't stop there!", but there's no space, where you can go?
Then you think you are sorted, right? Wrong. After 20 meters, they'll check again your ticket. What's the point of checking twice the ticket? And why just after an escalator?
Then, after a lot of swearing because you nearly died on that feckin escalator, there are the security controls. Obviously the queue was totally disorganized and way too long. If you are in rush, risking to miss your flight, well there are no priority lane, you are just going to miss it, that's it.
Then the security control space is extremely tight, I really don't understand who planned this place, plenty of room for shops, but no fucking space for the security control?

Obviously, if like me, you have a camera in your bag, they will not tell you anywhere to take it out, but it will be something fondamental for the security, like you just stole a truck full of cheese to Switzerland. Obviously, even if you are saying that there were no signs and no indication about that, they'll tell you that's a normal practice in every airport, where is fucking not. Obviously they'll do everything in slow motion, if you tell them you are losing your flight, they'll get slower.
At the end we get at the gate just in time, and we get to the bloody plane.
And here another nice surprise: my seat was broken. I've asked to the hostess if I can move somewhere else, but she said "I'm sorry but the flight is full". Yes, but I can't fuckin seat here! At the end my girlfriend, which was way pissed off than me, manage to find another seat and I swapped with her. But, that's a funny story, the air conditioning was leaking water on the head of the passenger seated beside my girlfriend. Obviously the hostess has no clue how to fix it, until my girlfriend, even more pissed off, stopped the leak with a tissue.
Anyway, after two hours we finally land in Rome, and somehow everything goes smooth there, only 45 minutes to get our luggages, which is a speed record in Fiumicino, and after we take a very expensive train to bring us to Roma Termini, Rome's main train station, we discover that our train is 45 minutes late.
Anyway, after a quite long travel on a first class cleaned last time in the 70s, we finally manage to get home.
Then, about the week in Italy there isn't much to say, we essentially ate like starving porks, spent money for the usual shit, went to the usual tour to visit all the relatives, or at least to those who get offended if you don't show up, and then they'll ask you the same shit all the time, "Does it rain in Ireland?" "Is the economy that bad?" "When you will come back?" (never is my answer, and then they laugh because they think I'm jocking, but I'm not).
The majority of the pictures I take in Italy are about my girlfriend's pets, which I obviously don't publish them, but one day I managed to get some spare time, which is not as easy as you may think, and go to take some pictures in a beautiful place very close to where we live in Italy, just a few kilometers before the famous Frasassi's Caves.

The small river who carved the mountain

This place has been carved by a river which over the millions of years has cut a mountain in two, and in the 19th century, under pope Leone XII, the italian architect Giuseppe Valadier build a beautiful temple inside a natural cave in the middle of the mountain.
And that's probably the best photo I took that week: 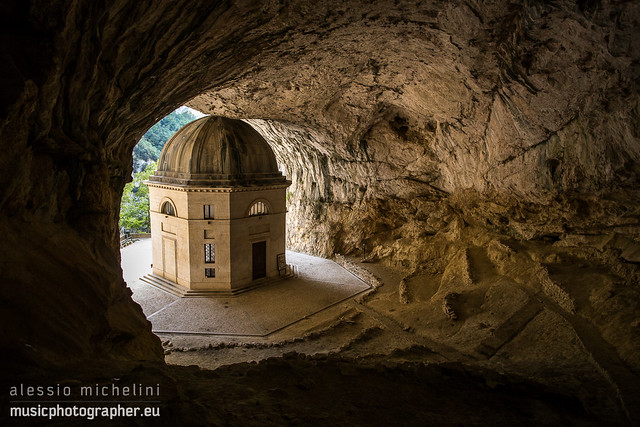 (click here for a bigger version of the image)

So, if you travel to my region, Le Marche, you have to go there. You have to walk for 15 minutes on a path that it will bring you to about a couple of hundred meters from the river level, but it's definitely worth it. 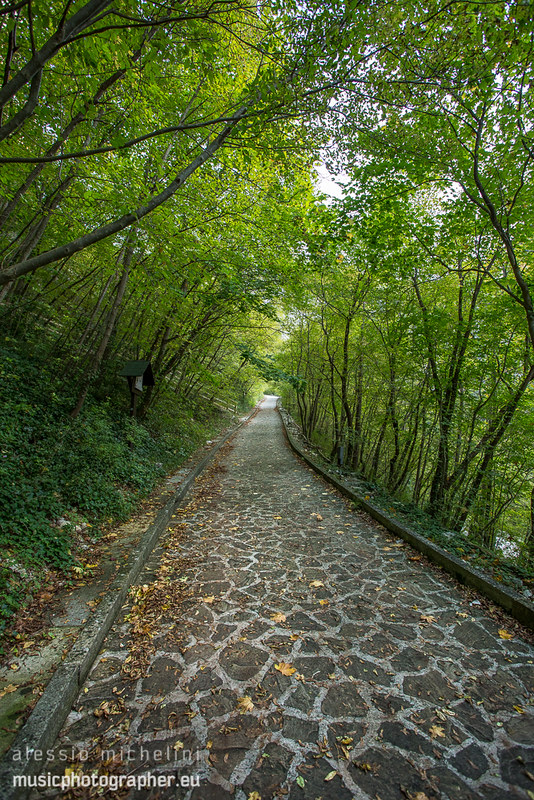 The footpath to the temple